Its been a disappointing week for sport.

Pre-1990s, the World mostly condemned South Africa for apartheid, and apart from the occasional tour, the Nation was isolated ibecause the sports world didn’t share its racist values.

That changed in the 1990s with the end of Apartheid, and sport welcomed inclusion.  After his election in 1994, Nelson Mandela encouraged black South Africans to get behind the previously hated national rugby team, the Springboks, as South Africa hosted the 1995 Rugby World Cup.  The Springboks won and the rest is history.  Nelson Mandela presented Pienaar with the Webb Ellis Cup while wearing a Springbok jersey, and Pienaar stressed that the win was for all 43,000,000 South Africans, black and white.

That single moment secured unity even in a Nation where segregation and racism was previously the norm.  As ousted opposition leader F.W. de Klerk later put it, that day:

“Mandela won the hearts of millions of white rugby fans.” 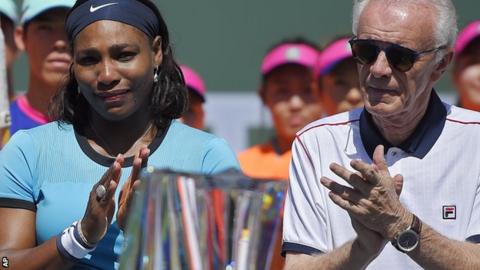 Sport has the capacity to unite people, and to bring change to a Nation.  Its leaders and heros, like it or not, carry a social responsibility as well as a ball.

It’s therefore incredibly disappointing, that on the same day we see a report about the need to close the gender pay gap, we hear that the Indian Wells Tennis CEO, Raymond Moore, was forced to resign after making shocking comments including that the women’s game was “very lucky” to match the men’s take-home winnings and that top women’s tennis players “ride on the coattails of the men” and “If I was a lady player, I’d go down every night on my knees and thank God that Roger Federer and Rafa Nadal were born, because they have carried this sport.”

His resignation, however, is purely down to the backlash rather than a broad understanding.  It’s not about being PC – its about setting an example.

Sadly many in sport share Moore’s blatantly sexist attitude.  Indeed, a new row has erupted as world tennis no. 1, Novak Djokovic, responded to Mr Moore’s comments by suggesting that men should be paid more prize money than women – whilst he acknowledged on one hand that women players had “fought for what they deserve, and they got it”, he followed by saying “I think that our men’s tennis world … should fight for more because the stats are showing that we have much more spectators on the men’s tennis matches.”   Enough said.  Women may have won equal pay in tennis after a long hard fight, but the battle for hearts and minds clearly has a long way to go.

Meanwhile, English Rugby Prop Joe Marler is also due to hear today if he will face any further actions over his racist call of ‘Gypsy Boy’ to welsh player Samson Lee in last week’s RBS 6 Nations clash.  6 Nations officials chose to take no further action because apparently it was said ‘in the heat of the moment’ and he apologised immediately, but World Rugby are making their own investigations.  One wonders if the same decision would have been made had he uttered the words ‘black boy’.  Racism is racism and many in the sport are unhappy with the decision to leave the remarks unpunished.

Wales assistant coach Rob Howley said: “As players and coaches, there’s banter in the game, but I think there’s no place for that.”

Let’s not forget, those who are ‘different’ to the rest of the mould have often fought their way to the top – and stand, rightly proud, as ambassadors.

In F1, first black racer Lewis Hamilton spoke earlier this week of the challenges he faced:

“Because we are the first black family in this sport with this success I always had the feeling that I had to work twice as hard and should be twice as polite and humble to make the breakthrough and become the guy who I am today.”

Samson Lee himself said ahead of the Wales v Italy game:

“There aren’t many travellers who play rugby. Most of the family take up boxing. I’m the first traveller to play international rugby and I’m very proud of that.”

There has been progress for sport in one area, much of the homophobia that used to surround sport is less of an issue.  In Tennis, Billie Jean King and Martina Navratilova challenged attitudes as much as they won titles, and more recently we’ve seen openly gay referee Nigel Owens emerge as one of the most respected officials in the game.  Welsh Legend Gareth Thomas, who holds more caps than any other player, described ‘coming out’ as the scariest experience of his life, and it was a proud moment for sport when instead of being jeered at his first public appearance, he came onto the pitch with a round of applause.

However, judging by the events of the past week, sport still has a long way to go to reach the standards we expect every day from HR professionals, who would find themselves the subject of a tribunal for such crass behaviour.  No qualified HR Manager would welcome the racist, sexist attitudes we’ve seen this week.  Whether or not they want to, they set an example to our children – and speaking of children, only last week a 15 year old was arrested for racist behaviour at a football match in Cumbria.

It’s time our sportsmen stopped being divas and embraced the fact that they are paid handsomely for a reason – and the boards that manage them need to do so in full knowledge of the power of sport to win hearts and minds and to change the attitudes of a generation.

No matter how sexist, racist and obnoxious our sportsmen and women choose to be at home, in public on and off court, pitch, or racetrack they need to be model citizens and set an example.  Otherwise, how can we arrest a 15 year old for racism when the same week, we condone it from a player?