More than 90% of maternity returners say they get no support at work when they go back, reveals survey by Leeds-based MMB

Home » HR News » More than 90% of maternity returners say they get no support at work when they go back, reveals survey by Leeds-based MMB

Lack of support for maternity returners among UK businesses has been uncovered in a new survey of professional, mainly management-level women. 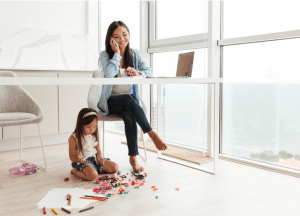 More than four fifths of pregnant women begin their maternity leave unhappy and lacking in confidence about work – and over a third feel so isolated when they return that they want to hand their notice in.

MMB, the working parents’ website based in Leeds, surveyed more than 1,000 mothers, 72% of whom were in jobs at management level or above.

It has calculated that by better looking after maternity returners, employers can boost the Yorkshire and Humber economy by £100m*.

In response to its findings, MMB has launched a campaign, #LeaveLoudly and #ReturnLouder. Backed by the Leeds West MP Rachel Reeves, it will empower women to call for better treatment and offer a maternity returners’ programme for businesses.

60% were worried about their requests for flexible working being rejected and 68% had concerns about the cost of childcare when going back to work.

“Our survey shows it’s time for action, not just talk. #LeaveLoudly is about senior managers doing just that, to help normalise flexible working and change working culture to focus on production, not presenteeism.

“Along the same principle is #ReturnLouder. We want mums returning from maternity leave, or time out raising children, to let everyone know that there is this huge talent pool of parents who often get overlooked.”

The Labour MP for Leeds West, Rachel Reeves, herself a working mother, is supporting the campaign, alongside business leaders and academics.

“The challenges facing parents returning to work after the birth of a child are immense.  Many have to juggle caring responsibilities and running a home with fitting back into the workplace.

“It is important that employers are sympathetic to those challenges and do far more to help working parents with flexible hours, support with childcare where possible and other measures.  Working parents are a huge asset to business and they should be nurtured and supported so they can play their part in growing the economy.”

The MMB Returner programme, involving coaching, mentoring and access to a supportive network, was developed by Abbie Coleman and Beckie Taylor two mothers who are passionate about changing working culture to benefit future parents – and helping companies to retain talented employees.

“To this end we have developed MMB Returner. It is one of the first programmes of its type.  We want to change the way the North engages its working mother talent and become the most desirable place to live and work. We need employers to join with us in engaging the maternity leaver and returner market.”

“The low numbers of women involved in a returners programme is consistent with other studies. This suggests the need to open it up to include a wider group of returners in order to facilitate businesses to address the huge loss of female talent post-maternity leave.”

“Motherhood is a game changer for most women, requiring a significant reorganisation of their lives. While a returners programme may help women transition back into the workforce, this programme needs to be combined with affordable high-quality childcare, flexible working and supportive workplaces.”

“There is a huge reservoir of talent that is wasted by not engaging and supporting women on maternity leave and upon return.

“They are efficient, highly skilled, intelligent and even more motivated than before because they want the best for their family. It’s nonsense that a business wouldn’t adapt in order to bring back that expertise to help it progress.”